The UK Biobank is releasing its imputed genotypes in BGEN format. This format is the apoidean’s leg joint but it does have one drawback, namely, it needs special code to read the files. This means that stuff like getting data into R is currently nontrivial.

On the other hand, I’ve made a C++ implementation available so it should be possible to hook this up. How hard could that be? This blog post is about building an rpackage (rbgen) that interfaces to this code.

The bgen code is in C++, so we’ll be best off using Rcpp. Unfortunately I’m much too lazy to want to learn how R or Rcpp packages really work, but luckily Rstudio seems to know just what to do. I go to File -> New Project, choose a new directory, choose ‘R Package’ and then ‘Package w/Rcpp’ for the type, fill in the name (rbgen) etc. and click ‘Create Project’: 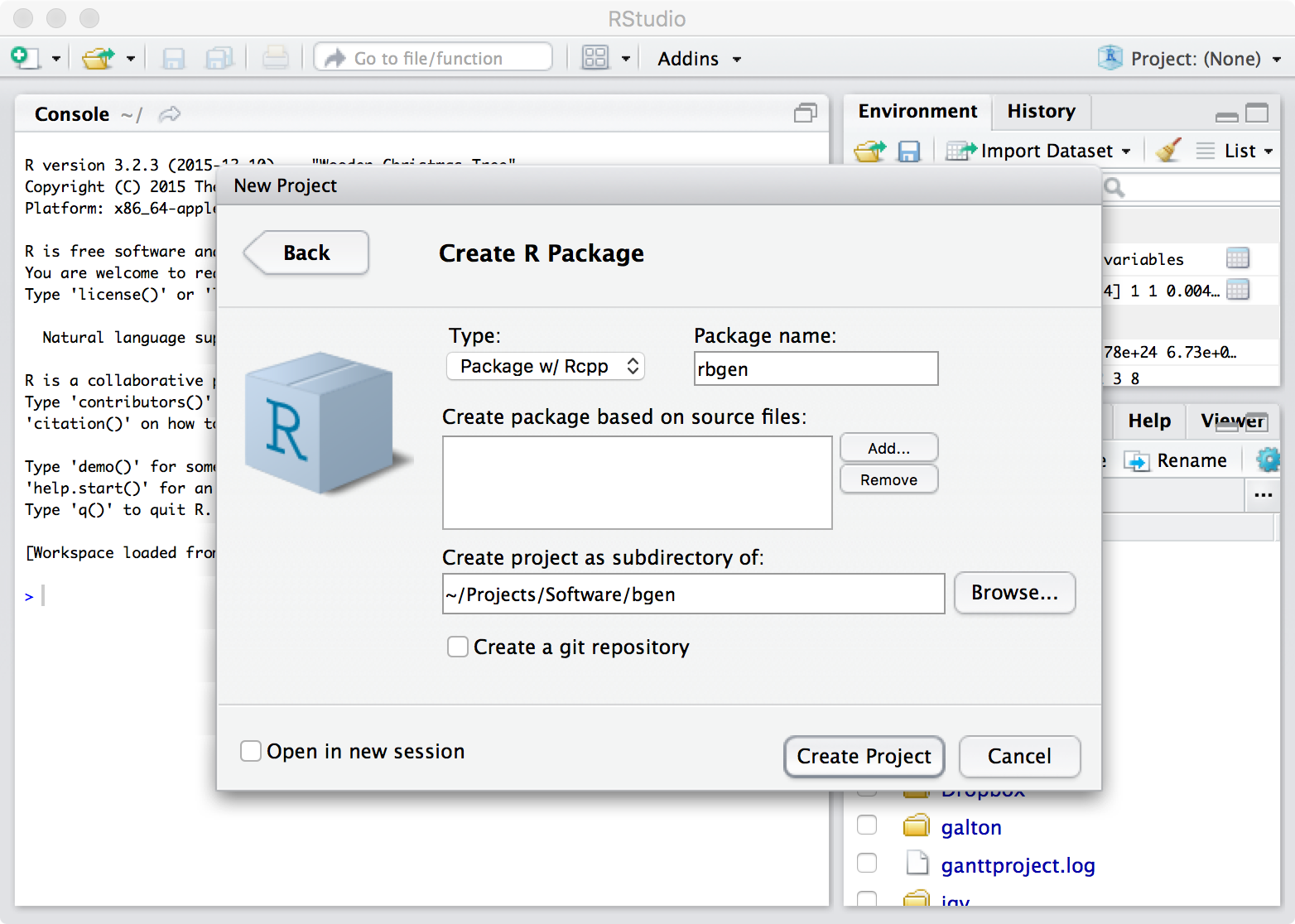 Bug’s your uncle, this creates a package with a folder structure like this:

Also I’ve noticed, more or less by accident, that pressing Apple-Shift-B rebuilds the package (aka ‘Build and Reload’ from the build menu).

The Read-and-delete-me file says we should put any C++ code into src/. Ok dokey. It also witters on about other stuff, like editing NAMESPACE, that mean very little to me, so I’ll ignore it and get on to building stuff:

This one is easy. I want to load data from a bgen file:

(Well maybe we’ll want other features in future, like listing the variants in the file, or loading only a subset of samples, or selecting variants by ID. Those will be addable later so for now we’ll stick with the above.)

Let’s start by making a dummy implementation that returns an empty list. I want something like this:

One of the magical things about Rcpp is that this just works. In fact all that’s needed is to tell Rcpp to export this function - we do this by adding the comment line

just above the function declaration. I put this in a file src/load.cpp. I hit Apple-Shift-B. Magic things happen. The package is built. The package is loaded. Cool. Look, it even works:

(Behind the scenes, this seems to call Rcpp’s compileAttributes(), which generates two files, src/RcppExports.cpp and R/RcppExports.R. Those files contain a pair of functions that glue the R and C++ code together. But since this Just Seems To Work(TM), no point in worrying about that for now.

Now comes the hard part. I’ve got some existing C++ code in the bgen package. It is built into object files and libraries with the bgen package (that uses the waf build system.) I need to link it into this package. How?

Several lost hours later I’ve reached the following solution. First, I’ve chosen to distribute rbgen as a subdirectory of the bgen repo. This means I can link directly to the build results from that package, rather than building them all over again. Second, it turns out the build is controlled by a file called Makevars that also lives in the src/ directory. Makevars is a makefile. But it is called Makevars. Go figure. Anyway Makevars does not seem to exist to start off with, so I made one. Here’s what it looks like:

The finished library depends on the object files (make magically builds the missing ones) and also on Makevars, so it gets rebuilt if any of these change.

We can checking this worked by rebuilding (e.g. Apple-shift-B in Rstudio) and then peeking at the symbols in the built shared library file. E.g. using nm:

The output lists a whole bunch of symbols, most of which come from the various libraries I linked from the bgen repo, confirming that linking is working.